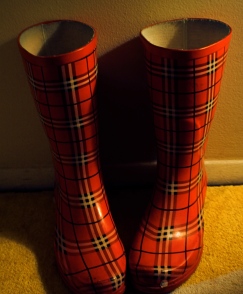 Tonight, I dawned my sorely neglected red-tartan wellies and took a walk in this cold March rain.

And it was glorious.

I know, you’re going to think I’m crazy. While everyone else has been wildly excited about this freakishly warm end-of-winter-beginning-of-spring-time, I have been moping around, still bringing jackets everywhere and wearing tights out of protest. Because I’m not ready for warm weather. I’m still a bit whiny about not really getting to wear my snow-boots.

And so today, I thank God for the rain. I think there’s a little more to it than just a random change in the weather. I think He did it for me (and for a host of other reasons, because my God is big enough to make it rain for a million reasons at once, including to show me that He loves me.)

Because, you see, I’ve been feeling a bit…desert-y. I know I’ve already shared this in a couple of posts, and I don’t want to sound like a broken record, but this is my life right now, so I’m going to blog about it. This time in my life feels like a wasteland, but God has been showing me repeatedly in Scripture that He brings water to the wasteland, He shows up.

Just this week, I encountered Psalm 68:7-10:
When You went out before Your people, O God,
when You marched through the wasteland,
the earth shook,
the heavens poured down rain,
before God, the One of Sinai,
before God, the God of Israel.
You gave abundant showers, O God;
You refreshed Your weary inheritance.
Your people settled in it,
and from Your bounty, O God, You provided for the poor.

Last night, after a long discussion with friends, I was counseled to earnestly seek the Lord, to ask Him why He would do radical things for me like He did for Joshua when He stopped the earth and made the sun stand still because Joshua asked Him to (see Joshua 10). My question wasn’t could He stop the earth for me, it was why would He? So I asked Him. I went to bed telling Him I didn’t want to sleep without Him, and I didn’t want to wake up without Him.

And today He poured down abundant showers. He marched through my wasteland and brought a piece of the Scotland I was missing so much. He refreshed His weary inheritance.

So yeah, I took a walk in the rain today.

And I enjoyed every minute of it.

2 thoughts on “I took a walk in the rain today…”